After reading the delightful Tethers (a book that has gone on my ‘read more than once pile’) by Jack Croxall (see his author interview here) I got to thinking about other contemporary books influenced by or set in the Victorian period.  And then, as I’m nice like that, I thought I’d share five of them with you.  Actually, the maths spods amongst you will see that there are six entries, but the last one I haven’t actually read.  See what I did there?

The End of Mr Y by Scarlett Thomas

I have to start this with a warning.  Actually, two warnings.  No three… nobody expects the Spanish inquisition (eh, digress, me?).

This book is rude.  Very rude.  So all you YAs out there steer clear *sounds of stampede to bookshop*. But I have to include it because it’s so awesome. And it has black edged pages – you don’t get more awesome than that.  Warning two: It’s not actually set in the Victorian era either.  But sort of.  The action is split between present day and an imagined Victorian landscape and features a crazy Victorian scientist.  It’s a kind of steampunk sci-fi with a smattering of erotica  ‘…a thrilling adventure of sex, death and time-travel.’ It’s indescribable.  Go read.  As long as you are of consenting age, that is.

The Night Circus by Erin Morgenstern

I think many people are reading this right now. This book contains such beautiful, lush prose that I find myself almost weeping at every page.  The story takes place over sixteen years, some of them actually after Victoria (cheating again, I know). I have read reviews of this that say nothing happens, or that what does happen is pointless or the reviewer didn’t understand it.  What I think they’re missing is the magic, both in the story and in the writing itself, and the magic that comes from the love affair between the two central characters.  I agree that some of the peripheral characters seem surplus to requirements at times and there is rather a huge cast, which might put some off but didn’t worry me.  The book evokes that aspect of Victorian society that was fascinated with new things, new discoveries and spectacle and invention, while still being wholly readable for a contemporary audience.  If you like magic and love and beautiful words, you’ll be in for a treat

The Ruby in the Smoke by Philip Pullman

‘Her name was Sally Lockhart; and within fifteen minutes, she was going to kill a man.’

Pullman doesn’t baulk from the blossoming sexuality of a young woman, nor the constraints and expectations of the age that she finds herself rebelling against.  The action is breath-taking and fast paced and dangerous enough to match any adult thriller.

This is a slow burner but gradually gets spookier as the book progresses.  We see Miss Prior’s mind begin to unravel and feel as though we are unravelling with her as she struggles to make sense of what is fantasy and what is real.  In the second narrative thread we are shown a history of Selina Dawes, celebrated medium, and the road that sent her to prison.  The two women are thrown together and what follows keeps you guessing the motives of any of it right until the end. Set partly in a women’s prison and partly in the world of spiritualism and table-tapping, Affinity is incredibly atmospheric and evocative of the simultaneous fascination and repulsion of death and sexuality that characterised the age.

The Glass Books of the Dream Eaters by G W Dahlquist

Warning!  Another saucy, bodice-ripping adventure with the best named heroine ever – Celestial Temple.  A bizarre, steampunk Victorian sci-fi adventure with a healthy dollop of fetishism and spy shenanigans, topped off by the odd murder.  An unlikely trio of heroes make their way through the gruesome underbelly of nineteenth century society in a car-crash book – you don’t want to look sometimes but you just have to! 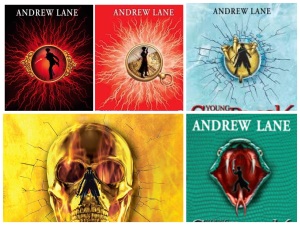 I’m cheating a bit with this series as I haven’t actually read them yet.  But I have it on good authority from an impeccable source that they’re amazing.  I loved Sherlock Holmes as a kid and still do to this day.  There are five books so far in the series:  Death Cloud, Red Leech, Black Ice, Firestorm, Snakebite and my impeccable source has devoured them all as soon as they have been released.  As you can imagine, it’s Sherlock Holmes so there’s oodles of mystery and action.