Earlier in the year, I was approached by Jason Graves, author of Blood Roses, to contribute to an anthology of paranormal stories he was putting together.  after much deliberation and some frantic searching, I came up with Soul Trading, a story that I had half finished some years before. I decided that this would suit the tone of the book and promptly got to work knocking it into shape.

Soul Trading: As Sasha discovers during the weirdest night out of her life, it isn’t only the Devil who makes deals for your soul…

The collection features six other talented writers, all offering spooky shorts guaranteed to keep your light on all night.

There’s a Goodreads giveaway going on and also a rafflcopter giveaway where you lucky people can win ecopies of the book, Amazon gifitcards and a grand prize of a bound copy of the anthology.

During the next few days I’ll be featuring the other contributing authors on my blog so you can hear more about their stories and a little about them too.

If you can’t wait that long, here’s the link for the book on Amazon 🙂

When I read Jack’s short story, I was immediately struck not only by how much tension and jeopardy he had managed to weave into small space, but by just how much potential there was to extend X’s world.  So I was very excited when he agreed to answer a few of my questions about the possibilities of that, and also about X herself. 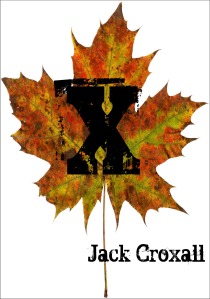 X’s story is just one experience of a much larger, clearly cataclysmic event. Are we going to get any more stories from this event? Will we get to find out who picks up X’s journal?

I hope so! If the response and reviews continue to be positive, I’d really like to explore more of X’s world with another, longer book. After all, X essentially takes place in a single room whilst, outside, the entire planet succumbs to chaos. I have a strong idea of what and who the next book would be about, and I already know it would be called Wye. As for who finds X’s journal, I know that too! There is actually a clue hidden somewhere in the ebook …

What first made you think to call her X?

There’s a line very early on, ‘Well, my name is – actually, I think I’ll refer to myself as X.’ When I got to writing that bit, the name X just popped into my head out of nowhere. The reason I kept it is because it feels kind of universal – anyone could call themselves X. That means that readers might just ask themselves, If I was in this situation, what would I do? That’s my ultimate hope for the story, anyway.

I know that you’re working on the second book of the Tethers trilogy. How did you find swapping between projects to complete X?

It wasn’t that bad, if I’m honest! Despite being a fifteen-year-old girl, X has a similar voice and tone to me. That little co-inky-dink meant that there were a lot less grumbles whilst writing X’s thoughts than say, Mr Cauldwell’s dialogue (from Tethers). I really struggle with Mr Cauldwell; he’s far more intelligent and eloquent than I am and so he takes lots of drafts to get right! Perhaps I should just kill him off?!

How conscious was the decision to make the setting for X a rural one? Why not do a 28 Days Later and have it in a city?

X was shacked up in a farmhouse cellar from day one – I had no idea why at first! And farmhouses are typically found in or around rural villages, so that’s just how the story developed. I’m glad that’s what happened though; a lot of books, films and TV shows have done city apocalypse much better than I could.

The response to X’s release was phenomenal, considering that it was quite spontaneous. How did it feel to be outselling Neil Gaiman?

Haha! Outselling one particular book of Mr Gaiman’s for one particular day in one particular chart feels pretty cool. Obviously though, it’s a relatively contrived and circumstantial factoid to draw from X’s opening day performance. I’m much more thankful and happier with the fact that readers seem to like X and have responded to her plight and the story!

A cheeky final one…. What happens to animals if the things outside get them? (You don’t have to answer this if you think it contains spoilers, but you can tell me in secret!)

Just between you, me and you readers, Sharon, all the animals are fine! Whatever happened to create the uglies seems only to have affected humans. Needless to say, my puppy-dog Archie survived the apocalypse completely unharmed!

Born in High Wycombe, Jack Croxall now lives in rural Nottinghamshire with his chocolate Labrador, Archie. He has a degree in Environmental Science from the University of Nottingham and currently toils away as a science writer in between working on his books. He tweets via @JackCroxall and blogs at http://www.jackcroxall.co.uk

You can find out more about Jack or where to buy X or Tethers by checking out his site. He also reviews books and films, so why not take a look and find out what he’s discussing today?