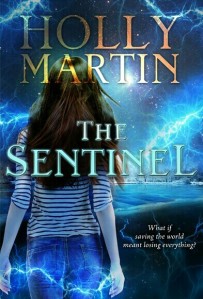 After reading Holly’s breathtaking book, The Sentinel (I can only liken the experience to a literary version of Speed where if you stopped reading at a million miles an hour your brain might explode!) I was keen to know more about what makes Holly (and Eve, for that matter) tick. So I decided to treat Holly to my infamous, Paxman-style author questions, which I haven’t done for a while now, and here’s what she had to say…

The Sentinel features Eve, a girl with super powers tasked with saving the earth. If you were suddenly thrust into Eve’s place, how do you think you’d react to being told this was your future? Would your reaction be like Eve’s or do you think you’d be different and if, so, how?
I think Eve handles it quite well considering she has just found out everything in her life was a lie and that everybody in her life including her friends and family were in on this big facade. I don’t think I would handle it all that well, I think I’d be in a corner crying. To be told that you are responsible for saving the world is huge, how does anyone cope with that amount of responsibility. I think Eve’s reaction to that would be very similar to mine, all those worries about whether she is good enough and not wanting to let people down, I would totally think like that. To find out I had all this amazing power though, I don’t think I would be quite so restrained as Eve was, I’d have great fun trying to find out what I could and couldn’t do. Eve seems to be more sensible in trying to learn her powers so she will be ready to save the world.
What sort of TV/ films do you like watching? Are they the same as Eve likes?
Eve wasn’t allowed to watch TV too often, there was always martial arts, learning how to shoot and lots of other kind of training that she never knew what it was all for. She longed for a normal life so i think to fit in she would watch things like X-factor or Britain’s Got Talent so she could talk about it with the other kids. Personally, I don’t watch a lot of TV, there never seems to be a lot of time around writing, seeing friends and family and a full time job, especially something that requires a weekly commitment. But I love films, love them, pretty much any genre is great for me, love the mindless action, big stunts and cool special effects, love sci fi and thrillers that mess with your head, love a laugh out loud comedy or a sweet romance. I generally avoid scary films, I live alone so there’s nothing worse than lying in your bed listening to the noises of the house and wondering if its ghosts coming to get you and no one can hear you scream. After watching Signs, (I was living with my parents at the time but they were away) I lay in bed all night listening to the floorboards settling and absolutely convinced myself that aliens were outside the door. Signs wasn’t even that scary. Blair Witch Project messed me up spectacularly, I still think about that film now, a film that is about what you can’t see and the fear comes purely from your imagination, that’s a clever film.
What book is open on your bedside table at the moment? Would this be a book that Eve would read?
Ha, how very appropriate that you asked me that question, last night I started reading The Young Moon, book 2 of the Sky Song Trilogy. I absolutely loved the first one in the series and I’ve been dying to get into book 2. Eve would love that story and I think she could definitely relate to the decisions and responsibilities that Jacob has to face. (Ed: I approve wholeheartedly of this choice!)
If you can tell us without spoiling, what’s next for Eve?
She meets the Oraculum, those that created her, in book 2. They don’t exactly hit it off. We also meet The Reaper’s, the ones that do living autopsies on those with powers, we meet one of the animal hybrids and Seth’s half brother. There’s loads more action and as Eve becomes stronger in her powers, she can achieve bigger and better things.
Name 3 things that are within reach of where you’re sitting right now. Can you tell me if there is any significance to them and what that significance is?
My notepad, I always have this within reach, so I can write in it whenever inspiration strikes. I write scenes, ideas, conversations, characters. Sometimes they turn into something, sometimes they don’t. I also use it to keep track of dates or events so I don’t forget.
A half eaten bar of chocolate, its my carrot on a stick, write 2000 words and you can eat the rest. I’ll invariably eat it anyway as a reward for trying but it helps to have something to work towards.
My photos. I have a big collage frame that has 15 photos in one frame. I have ones of a snowy forest, deserted beaches, ruined castles, flowered fields and incredible sunsets. They’re from my travels. It was never supposed to be a mood board but it became one, now I can use these to help me write detailed descriptive scenes or help to remind me what it was like in a particular country

If you want to find out more about Holly and Eve, you can visit Holly’s spanking new website or you can add The Sentinel to your Goodreads shelf of just get on Amazon and ruddy well buy it…. you know you want to!