Today, I’m giving my blog over to something a little bit different. When I was asked to take part in the promo blitz for Rowan’s new book, I was only too happy to say yes. I think most women have had some experience of abuse, either directly or indirectly, and so if you think that it doesn’t concern you, or will never concern you, then you’re wrong. With that in mind, please support the cause by checking out Rowan’s new book, which will not only help, but will also be a cracking read.

On  September 10th Rowan is publishing her novella Woman Walks into a Bar as an ebook for the first time. And 100% of her proceeds will be donated to Refuge.

Her  goal is to raise £10,000 and you can help. All you have to do is buy a book, or  two, and get your friends to buy one too. You’ll get a funny, romantic and  touching summer read and you’ll be helping women you’ve never even met at  the same time and all for the price of £1.59! 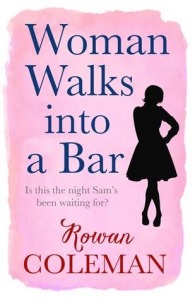 The story behind the story

Every  book Rowan have ever written has meant a lot to her, but with her latest book  ‘Dearest Rose,’  something really special happened when the real world and the fiction she loves  to write collided.  It changed her as a person and a writer,  forever.

She  was getting ready to research her tenth novel, which with the help of her  Facebook readers she decided should pivot around the theme of domestic abuse. It  was a subject she’d touched on briefly once before, when she wrote a short  novella as one of the first Quick Reads called Woman Walks into a Bar,  which to this day remains one of the pieces of work of which she is most  proud.

So  she posted on her Facebook page asking if anyone had any personal experiences of  domestic abuse, and any stories they might share with her in  confidence.

She  was shocked and amazed by the response; there were more than 200 emails waiting  in her inbox the next day. Each story she read was horrific and frightening in  its own way, giving her an insight into the secret lives of many women; lives  that all too often remain hidden. Domestic abuse can happen to anyone – well  educated wealthy women are just as likely to suffer as women from a working  class background – but the one thing all those women had in common was that they  were survivors. After years of being mentally and physically beaten down, they  had managed to find the emotional strength, somehow, to break free and start  again.

Now  Rowan wants to do something that will help other women find that inner courage,  and change their lives.

‘Woman  Walks into a Bar’ is the story of 28-year-old single mother Sam spends her days  working in the local supermarket and her Friday nights out with her friends  letting her hair down at the White Horse. Life hasn’t been easy for Sam and her  daughter, Beth (who always looks on the bright side) but she’s always hoped that  one day she’ll break free from her past and meet The One.

But  after a series of terrible dates with men she’s met through an internet dating  site, that have all been as awful as her daughter’s terrible jokes, she’s  starting to lose heart – until her friends tell her they’ve set her up on a  blind date. Sam’s horrified but finally she agrees to go. After all you never  know when you might meet the man of your dreams; maybe Sam’s happy ending is  just about to begin….

So,  come on and join Rowan, and help to #supportafriend on September  10th. Every time you buy or pre-order ‘Woman Walks into a Bar’ you’ll  be entered into a prize draw for fabulous prizes every week, while the  #supportafriend #womanwalks campaign is running. On 10th September,  tweet Rowan photos of you and your friends, tell her your ideas to support a friend, and why  your friends mean so much to you.

You  can be a best friend to someone you have never even met. You can help someone  out there find the support they need to change their lives.

If  you are a blogger or tweeter, spread the word using #supportafriend #womawalks.  If you are a company who could offer a prize to drive book sales and thereby  money for Refuge, please get in touch. If you are a woman in an abusive  relationship, or if you have a friend about whom you are worried, please get in  touch with Refuge and ask for help today.

Rowan  Coleman grew up in Hertfordshire secretly longing to be a writer despite  battling with dyslexia.  After graduating from university she worked in  bookselling and publishing for seven years before winning Company Magazine Young  Writer of the Year in 2001.  Her first novel ‘Growing  Up Twice’ was  published in 2002.

Rowan  has gone on to write eight novels for women including the bestseller ‘The  Accidental Mother, The Baby Group’ and ‘The  Accidental Wife‘  and eight novels for children and teens including the paranormal adventure  novels Nearly Departed and Immortal Remains under the name Rook Hasting. Her  books are published around the world. She now lives in Hertfordshire with her  family.