As with many of the bloggers I’ve got to know this year, I met Amy through Twitter.  She’s still at school herself (one of the actual young adults that read young adult!).  She’s enthusiastic and passionate about literature and throws herself into any event wholeheartedly.  Not only that, but she’s a Whovian, so that makes her pretty cool in my eyes!  This is what Amy had to say in response to my questions about her reviewing habits: 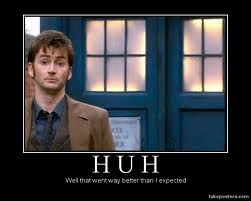 That’s proper descriptive, alright? 😛 I don’t have a reviewing schedule or a schedule for any part of my blogging, really. I never blog on a Sunday, that includes writing posts, posting my posts then & much more of my online activity. It’s my cut down day. You’d think, and so would my parents, that my cut down day would be during the week. And in a way, I have one then. But only from recently- rehearsals in the choir I’m in have been more frequent & that’s every Wednesday now, at least! So, I love that. I love blogging too but I cut down when I want to do something else I love- like my Art (which is mainly homework to be fair, so time-consuming), singing or spending time with family (that’s on Sunday, and it’s not just with my parents… it’s the wider family). That means I don’t blog as much as some but I never expected to be a 24/7 blogger. I never expected to blog as much as I do, even, though! And I didn’t expect to say ‘Huh?’ to this question until you asked it. Sure, it takes up quite a bit of time. I post 1 or 2 reviews a week; not just reviews though! Each review takes me on average 1-2 hours. Closer to 2 often :L It doesn’t sound a lot but I have to make time for other posts, other contact with authors (though reading their books? That’s one of the best!) & of course the reading! It sounds obvious, or maybe odd… To me they are the elements of blogging that I can think of from the top of my head.

What started you book blogging? What makes you continue to do it?

I say the same thing for starting it every time (sorry). I was inspired by Vlogging. I don’t mean I vlogged but I used to watch just vloggers until I stopped off at booktubers (yes, vloggers but bookish ones who basically video what I blog now). Lots had goodreads & I’d been a referral from google many a time. I always googled bookish things and it’d direct me there even for quotes! I didn’t realize much about it until I signed up, followed these vloggers, started reviewing, doing other stuff & ended up finding out about the non-video equivalent. I liked those reviews too and the blogs were a good idea so… hey, presto! I wish I could say a certain blogger did but really it was a journey which took months & eventually I blogged myself, not understanding quite the size of the community just knowing that I’d seen some pop up here & there. Now I know the truth 😉 Now I know the truth I can’t go completely. I can cut down, even if it’s not for long at all. I have to be here at least some of the time having these great experiences. The great experiences making connections with authors, bloggers & helping others to make them where I can. I’m quite a small (not just height-wise) blogger but that’s not what matters. It’s not stats alone that drive me, it’s you guys! The fabulous community which I am going to give a… WAIT FOR IT! *Big Hug*

Yup, it’s all about the hugs *giggles* Oh, don’t forget the cookies… We make, and eat, some great cookies in my blogging group, Blogger Lift. Yay for us! Thanks for having me here today (: I’ve really enjoyed answering these epic, ramble-provoking questions Sharon!

Tomorrow is Friday *cue wild cheers* so there will be a break from the blogging feature to find out what’s in my earholes.  Who knows what musical treasure you we’ll dig up?  But worry not, there will be more book blogger musings on Saturday 🙂

2 thoughts on “Amy Bookworm reveals what she loves about book blogging and surefire ways to hack her off!”