I was born in Dorset, the oldest of four children, but now live in Stoke-on-Trent with a family of my own.  I currently divide my time between working as a freelance editor, holding down a day job, and writing my own stories.  An avid reader with eclectic tastes across many genres, when not busy trying in vain to be a domestic goddess, I can often be found lurking in local coffee shops with my head in a book. Sometimes I pretend to be clever but really love nothing more than watching geeky TV and eating Pringles.  I’m ridiculously interested in loads of subjects.  They say a little knowledge is dangerous and I’m always getting into trouble spouting half-baked facts about something! 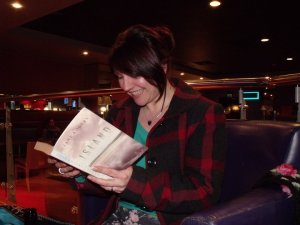 I’ve always loved to read, despite nobody else in my family being particularly literary. I can still remember the surprise on the face of a visiting aunt as she caught me stretched out on the floor with a newspaper, aged about five or six. I loved to read anything, but my favourites were adventure stories, the more dangerous and breathtaking, the better.  And I can never remember a time when I didn’t make up stories.   As a kid I would spend hours dreaming up alternative endings for films I’d seen or books that I’d read, or continuing their adventures beyond the end.  However, I come from a working class background and had a fairly conventional education, and story-telling wasn’t something we did.  It wasn’t until I had been working for a couple of years, after leaving school, that I decided I wanted more out of life.  So, I returned to college to do my A levels.  I got married and had children and worked some more.  Then, I got the academic itch again and enrolled at Staffordshire University as a mature student in 2006.  It turned out the be the best decision I have ever made.  I had signed up for English Literature, but had a space in my timetable to fill, so I decided to take a creative writing module.  I finished the module with a mark equivalent to a first and quickly decided that, maybe, I could be ok at this writing lark.  So I swapped my degree to joint honours English and creative writing and, during the summer break of 2007, wrote my first novel.  I finished my degree with first class honours.  Now, I mostly write YA contemporary fantasy, but I dabble in other genres from time to time. Late 2013 I was signed by LAW literary agency.

So, that’s me up to now (sort of).  Who knows what the future holds?  But I think it will be fun finding out!

I hope you enjoy discovering my books too.  You can get more information about each one from the page tabs at the head of the blog:

Sky Song (book one of the Sky Song trilogy)

The Young Moon (book two of the Sky Song trilogy)

Not of Our Sky (book three of the Sky Song trilogy)

Feel free to leave comments on anything you see; I love to chat!  And don’t forget to visit my YouTube channel 🙂

18 thoughts on “Thank you for visiting! Here’s where you can get to know me…”