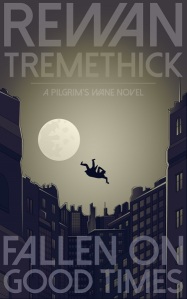 As part of the blog tour for Fallen on Good Times, I’d like to introduce you to Rewan Tremethick. I’ve followed him on Twitter for a while and was very lucky to see an early draft of this book. Since then I’ve followed his progress with great interest and here we are, finally, with a release date. Rewan has kindly put a guest post together with some info about the book, so, without further ado…

From hobbyist to professional: a reader’s guide to a writer’s plight

In her 2013 Roundup Sharon talks about how releasing her novels finally gave her the validation she required as a writer. You see, writers may like to put on a facade of a deeply thoughtful creative with their heads lost in the clouds, but the truth is we’re a needy bunch. We spend less time staring forlornly out windows in big white puffy shirts, or reading large leather-bound books under the shade of a giant tree than we would like, and more time sitting in a chair at four o’clock in the morning doing a little dance every time someone views our latest blog post.

This writing game is an odd thing to pursue as a career, because it’s just a hobby really. There is no middle ground: you are either a hobbyist, or a professional. Every writer you have ever read started out as some quiet little person scribbling away for hours on end, possibly while their families tried to convince them to do something a bit more useful, or trick them into the back of a van using cookies in order to go for a trip down to the psychiatrist.

For us as readers it seems strange that Sharon could doubt her own talent. There is one fundamental thing about writing which makes it so hard to master and so hard to measure. With a lot of other hobbies it is very easy to see when you are getting better. I’m also a drummer, so I know I’m improving when I finally master a new groove, or increase the speed of one of my rolls. Take the marathon runner, who can accurately measure her progress using a simple stopwatch. With writing it isn’t that easy.

I suspect a lot of writers, upon being published, have felt like they were frauds. I’m a copywriter during the day, which means I write a lot of business texts such as websites and brochures. Every now and then I still sit there and think ‘I’m getting paid to do this. Someone is paying me money just to sit here and write’. It’s probably the same with fiction. Creating novels is a very intense and draining process, but it’s still something fun and rewarding. It doesn’t involve assembling pigs, or grinding down mountains, or whatever is proper people actually do for a living.

In a few weeks when Fallen on Good Times actually comes out on 31st May I will legitimately be able to call myself an author. (Incidentally my dictation software changed ‘author’ to ‘awful’. Considering a lot of my writing goes through it, perhaps I should be concerned that it’s trying to tell me something). But I’ve been writing books for years. Doesn’t that make me an author? You can probably start to tell why we’re all so neurotic.

Having to treat your hobby like a profession is a very weird change. Luckily I happen to like marketing, and tracking things with spreadsheets, and all that business Malarkey. But it is still odd, to suddenly ask for money for something which you’ve been doing for free. Of course it’s a perfectly logical and rewarding relationship that writers have with readers. You pay us a little bit of money for our time, so that we can afford Jaffa cakes and Pepsi and huge tubes of Smarties, or whatever else it takes to keep as writing when it’s two in the morning, and in return we introduce you to some amazing people in some incredible situations with whom you can become friends, comrades, or even fall madly in love with. But it still seems as odd as standing up in a crowded room and saying “Would anyone like to pay me to draw a moustache on this duck?”

So be patient with us. We may seem overly eager for attention sometimes, but it’s because deep inside we’re all afraid that at some point the police are going to drop down through the ceiling and crash through the door, take away our laptops, and force us to get an actual job.

Fairy tales are warnings. Legend is history. Monsters are real.

America, 1920. The city of Pilgrim’s Wane. The people on the street can be dangerous, the ones in the shadows even more so.

Private Detective Laslo Kane is giving up. But then a brutal murder drives a terrified investor to offer Laslo a life-changing sum of money to solve the case. The fee could set Laslo up for the rest of his life, assuming he still has one when he’s finished going up against the most dangerous crime family in the city.

Find out more about the novel and sign up to get the first chapter free here.

About the author:
Rewan (not pronounced ‘Rowan’) Tremethick is a British author who was named after a saint. St Ruan was invulnerable to wolves; Rewan isn’t. His paranormal detective noir, Fallen on Good Times, is being released towards the end of May. Rewan has already had two murder mystery novellas published.
When not writing, he can be found drumming, reading, and pondering. He works as a freelance copywriter, so it’s hard to find a time where he’s not writing anything. Rewan is a fan of clever plots, strong woman who don’t have to be described using words like ‘feisty’, and epic music. He has dabbled in stand-up comedy, radio presenting, and writing sentences without trying to make a joke.
He balances his desire to write something meaningful by wearing extremely tight jeans.