I’m thrilled to welcome another indie author, the delightful Jaimie Admans, to the blog to face my questions.  Jaimie’s first YA novel, Afterlife Academy, is due out 15th March and I can’t wait to read it. So, here she is to face the music… 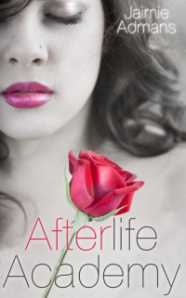 If you don’t already know, what star sign do you think your main character is?

Ooh, now that’s something I never thought of when writing this book! I think Riley is a Leo. She’s quite fiery, I think she’s quite arrogant in the beginning, and she’s impatient and proud, and she has a great sense of humour!

If you could be friends in real life with any of your characters, who would it be and why?

I really like Anthony. He grew and changed a lot as I was writing him, he ended up being a lot nicer and more fun than I had originally intended, and I ended up really enjoying writing him. He’s a bit of a geek and was meant to be quite boring, but he turned out to be funny and really supportive! He’d be a great friend to have!

Have you ever written a character that you’ve disliked so much you’ve scrapped them from a work?

Not yet! I think dislikeable characters are really fun to write! I don’t write straight-up evil villains as such, but writing unlikeable, nasty characters is great fun! I like it when they’re not outright evil but you have to gradually show their true colours through their actions.

Which of your characters would frighten you if you met them in real life?

Eliza Carbonell, who is the headmistress of AfterlifeAcademy. She’s pretty strict and you don’t want to go against what she says. I think she’s quite reasonable and understanding sometimes, usually in that “I’m not mad, I’m disappointed” way, but things would get pretty scary if you step out of line once too often!

Describe your book in one word.

Death-after-life. The hyphens make it one word, right? Right?

Describe yourself in 5 words.

Do you ever consult friends when you’re stuck with a plot?

No. I can’t bring myself to talk about works in progress. It’s the fear of never finishing something and having to admit you’ve failed. It’s only when I have a decent draft, usually the second, that I know can be fixed and edited into some sort of readable shape that I can bring myself to start telling people anything about it!

Procrastinating. Honestly, it would be amazing the amount of things I could do if I just got on with it! I always say I need more hours in the day, but if I stopped fizzing around aimlessly on the internet, I could get much more done! I have new book ideas to write and books to edit, a TBR pile so large I can’t see the top of it, and a to-do list as long as both my arms, and yet I still manage to find the time to play Scrabble and Angry Birds on my phone when I should be doing something else!

If you could converse, a la Dr Dolittle, with one type of animal, which would it be and why?

I’d love to be able to talk to my own dog, a Chihuahua called Bruiser, I reckon he’d have some good things to say, although he’d probably tell me to get off the internet and get writing! It would be great to be able to talk to dogs. Dogs know all their owners secrets – mine certainly does!

TEA! How could you even ask me that?! Tea is an absolute necessity, and I am absolutely addicted to it. I can’t function in the mornings without a cuppa! I can’t stand coffee – I don’t mind coffee flavoured things like cake or ice cream, but coffee itself is vile! Tea all the way!

Find out more about Jaimie and her books at the following locations: