As the deadline gets closer for the release of The Young Moon and I’m still behind on promo for Sky Song, I’m beginning to wonder if I’m actually normal in the head.  I look at my kids like I don’t know who they are, I put food in the oven that emerges four hours later as an unrecognisable husk, I wash dishes in shampoo, I go shopping in odd shoes.  In short, I’m lost in a world where real people have been replaced by book characters.   But I don’t mind admitting that, despite all this, I’m having the time of my life. 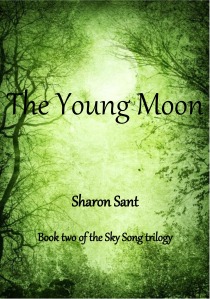 The decision to self-publish was a long time coming, and part of me thought that it would make me feel like a failure for not having a proper deal (although I was lucky enough to land one for Runners shortly afterwards) but the opposite turned out to be true.  Instead of feeling like a failure, right now, I feel like captain of my own ship.  I call the shots – I decide what I write, what my deadlines are, how I market my wares.  At the moment people seem to like what I do and the feedback is good, I’m productive and full of new ideas. I may not always feel this way, and it doesn’t mean that I wouldn’t still love an agent, but, after years of hiding my stories away,  it seems like my writing career has finally begun.  This year is already mapped out in terms of releases, until September at the very least, and possibly beyond.  And even if no one is reading them, I’m having a ball writing them!

The Young Moon is the second book of the Sky Song trilogy, due to be released for Kindle 8th March 2013.