I recently started reading a book that had me crying during the first few pages.  Which got me thinking about other books that have done the same thing.  And then I thought I’d share them with you.  So… my choices are, in no particular order, and there will be others that pop into my head as soon as I switch off the laptop:

The Book of Lost Things by John Connolly

I LOVE this book.  I have read it three times and am preparing to use it for my PhD studies.  Set in England against  the backdrop of World War II, it follows the progress of teenager David, who has just lost his mother to cancer.  Shortly afterwards his father meets another woman and a relationship blossoms, one that David finds hard to accept.  What follows seemingly sets up as a tale of familial conflict, but soon takes the reader by complete surprise. Fleeing an argument, David finds himself trapped behind a wall as a plane crashes in his garden and the only escape is a portal to a world of every fairy tale he has ever been told by his mother.

The Road by Cormack McCarthy

On the face of it, nothing really happens.  But The Road, in my humble opinion, is one of the most finely crafted books I have ever read.  A man and a boy (we never find out their names) travel across America in search of some relief from their horrific life in the wake of an apparent apocalypse.  The most important consideration is food and shelter from the incessant cold, but close to that is perpetual fear from the gangs that roam the country capturing and eating defenceless people.  Terror for the reader comes from the notion that this man and his boy will be taken, and tears are shed for the internal dialogue of the man as he vows to protect his son, even if it means killing him with his own hands rather than let him be taken by one of these evil gangs.

The Fault in Our Stars by John Green

Teenagers with cancer.  Doesn’t take a genius to work out where this is going.  What Green does that is so poignant is that he gives them spirit and a need to wring every last bit from their short lives in the knowledge of their mortality.  Everything they do is like they’re doing it for the last time.  And when the time comes for at least one, as you know it will, it’s all the more tragic.

Sorry, but I have to put Charlie Boy in here.  I adore this novel and have done since I was a kid.  I can’t even remember how many times I’ve read it.  And as everyone (unless you’ve been living on Venus) knows the story, I’ll spare you the synopsis.  But God love Charlie, he was a master at tear-wringing.  When Oliver’s mother dies right at the start, I’m already in bits, perhaps because I know what’s coming.

Blub factor:  Depending what edition you have, page three. 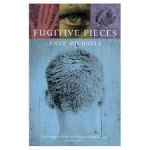 This was a book I read for a university module and something I probably wouldn’t have picked up otherwise.  Sometimes, the books that you don’t choose to read are the ones that turn out to be the most rewarding.  It follows Jakob, a rescued survivor of the Holocaust who is taken to a Greek island away from the fighting to grow up. But as an adult he still struggles to come to terms with what he saw and went through as a boy and is haunted by the ghosts of the family he lost.  Michaels has an assured and poetic style that is both melancholy and a delight to read.

2 thoughts on “Five books that had me weeping from the off (and begging for mercy by the end).”